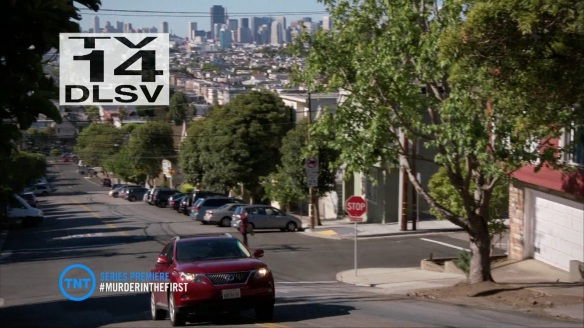 Last year around this time, Hollywood came to Bernalwood to shoot a new TV show. It finally premiered Monday night on TNT, and it’s called Murder in the First. It’s produced by Steven Bochco (Hill Street Blues, NYPD Blue, Murder One, Brooklyn South, City of Angels, LA Law, Philly, and of course, Cop Rock), so of course it’s about cops.

The pilot opens in Bernal Heights, where SFPD inspector Hildy Mulligan (Kathleen Robertson) lives in a cute little house near the top of Alabama St. with her adorable moppet of a daughter. Robertson has been in a ton of things, going back to the original Beverly Hills 90210 and earlier as a child star in Canada. Bonus Canadian content for Burrito Justice: she played Mrs. Hockey (Colleen Howe) in 2013’s “Mr. Hockey: The Gordie Howe Story.” 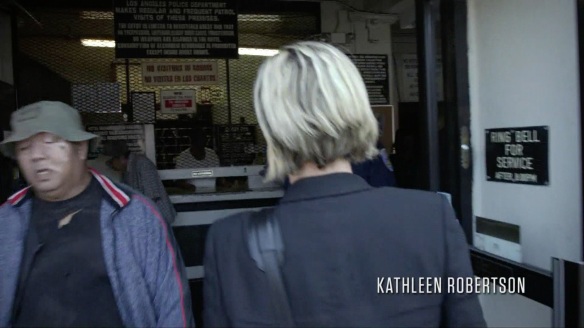 Last week saw the launch of HYPNO SF, a thing whose Twitter bio says it’s “visually exploring + animating San Francisco” with crazy/amazing yo-yo videos of the Golden Gate Bridge, Market Street from the Ferry Building to the Castro, and more. These shots can be seen in the video for a song called Water Falls by Kalle Mattson, and  and in animated GIF form. The gorgeous spinning shot of Sutro Tower at the end of the video really got my attention.

Why not try something similar for Bernal’s own Sutrito Tower, I thought. So, with my iPhone and bicycle, I set off to get some pictures. 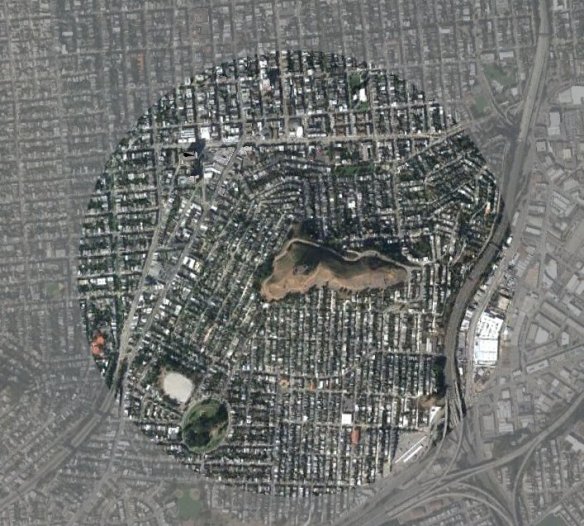 Map image I had on my iPhone as a guide for taking pictures approximately the same distance from Sutrito Tower.

I figured that the hard part would be aligning and scaling the pictures, so I wanted to take them from close to the same distance from the tower. I had the map above open in Safari, and switched back and forth between that, Maps, and the Camera app. I ended up deviating from a circular path quite a bit, in order to get usable pictures: 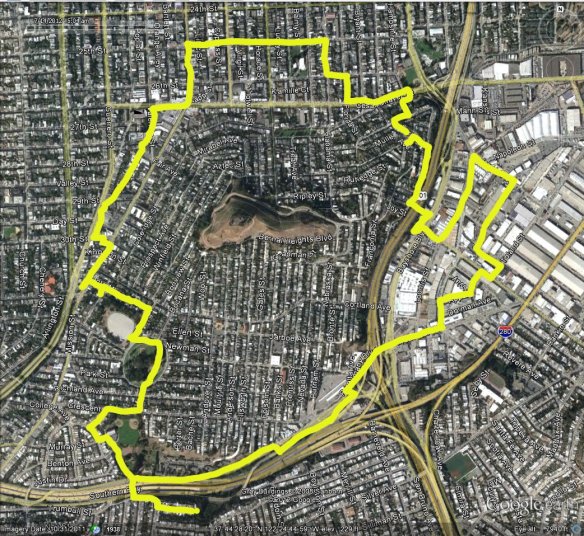 Actual track taken. More or less. Reconstructed from embedded lat/longs in the pictures.

I got back and started aligning and stacking images. I used GIMP 2.6 for Windows, which is free, and supports creating animated GIFs from an image with layers. I created an empty 1280 x 720 image, and added a layer per frame. For a first pass, I didn’t even scale or rotate the images to match, I just copied and pasted a chunk out of the native resolution iPhone photos, and nudged it until Sutrito roughly lined up with its image in lower layers.

File, Save As, GIF, click the “animated GIF” (not “flatten”) radio button, and I soon had a 16 megabyte animated GIF. And it basically worked! It didn’t suck. When I have a bit of time, I’ll probably try to fix the rotation and scaling, but this seemed good enough to Tweet. Thanks to a retweet by Burrito Justice, more than three people actually saw it, including Mr. HYPNO SF, Kevin Parry:

So that was a nice way to spend a Saturday. 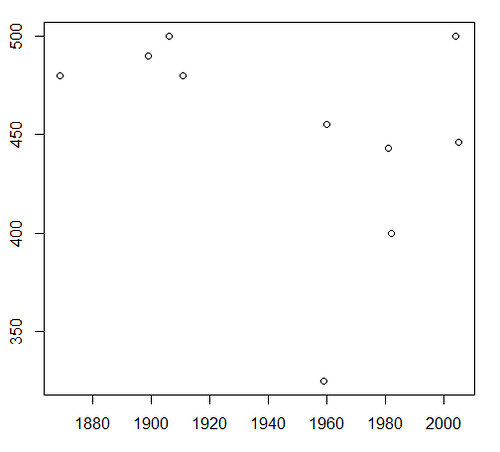 Update April 10: This is substantially rewritten from the original, to fix a mistake Stephen noted in the comments. I tried just doing strike-throughs of the erroneous or irrelevant parts, but that just made it more confusing.

Obviously, the ideal spot for observing and photographing would allow framing the eclipse and Sutro Tower together. Back in January, Burrito Justice used the Photographer’s Ephemeris app to get exact figures for the Mission: 18.8° altitude,  281° azimuth at 6:32 pm PDT:

Based on the USNO calculator, Monday, April 23 should be a perfect night for a dry run. The new moon will set half a degree north of its eclipse track.

On April 23 at 8:36 pm PDT, the moon will be at an elevation of 18‌.9°, azimuth 282°, or a little over one full-moon width north of the maximum-eclipse position on May 20. Assuming the fog cooperates, it should be easily visible: 7% illuminated, setting an hour and 15 minutes after sunset. At about 9:57 pm, the moon will set behind Twin Peaks at azimuth 293‌°, still half a degree north of its May 20 track.

The eclipse will be over by sunset/moonset on May 20, though. For a dry-run of framing the maximum eclipse, and then its descent toward the horizon, the best time will be from around 8:30 to 9:00 pm on April 23.

So it’s another time-lapse moonrise. The minor innovation tonight was moving the cameras down off the railing so the wind wouldn’t blow them off. (The wide angle camera was inside the kitchen window, while the telephoto was outside on a low table, shooting through the slats in the railing. I’ll get a picture next time.)

I think my favorite part of this one is the Caltrains streaking by, reflecting the setting sun directly back at the camera. The actual moonrise over the East Bay hills wasn’t visible because of the clouds and haze, but it popped out of those reasonably quickly.

If you live on Peralta Avenue in Bernal Heights, you’re probably used to getting phone calls from lost delivery drivers.  They’ve managed to find the 200 block, you’re in the 500 block; how many obstacles could there be between you?

Turns out, there are a lot. That staircase on the right is the 400 block of Peralta. But how did Peralta “Avenue” end up in no fewer than eight non-contiguous segments? In theory, it was supposed to be a (mostly) continuous street: That’s a 1924 Rand McNally map, courtesy of David Rumsey. Peralta and Esmeralda are highlighted. These roads existed mostly on paper, as planned improvements. Note that “paper” Esmeralda runs right over the top of Bernal Hill: Sutrito Tower would be at the intersection of Esmeralda and Shotwell. Fourteen years later, these roads remained wisely unbuilt: 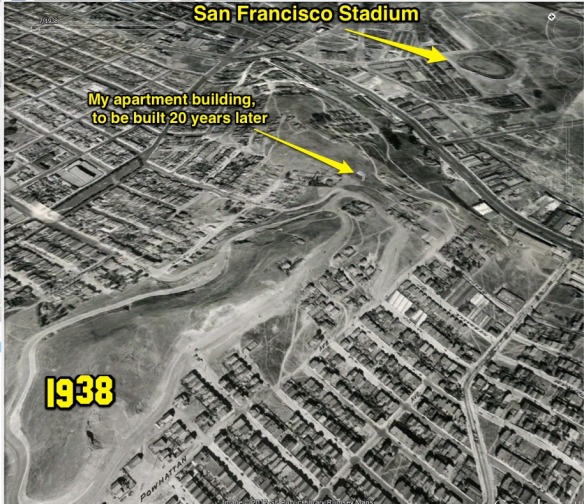 The amazing Harrison Ryker aerial map photos of 1938 San Francisco are now, thanks to the David Rumsey Map Collection, available as a layer in Google Earth! When I first saw these aerial photos at Burrito Justice, I was curious about the stadium on the upper right of this Google Earth view — a race track identified by Burrito Justice as San Francisco Stadium. I would have been able to see it from my apartment building, but alas, it wasn’t yet built when the track existed. Nevertheless, I decided to put my model of it in the scene above, since nobody was using the land. (I’d build a model of the stadium, but I’ve only ever seen the one photo of it, Ryker’s, looking straight down.)

There are, of course, many well-organized midget racing speedways such as Madison Square Garden Bowl at New York, River View at Chicago, Walsh Stadium at St. Louis, San Francisco Stadium at San Francisco, Municipal Stadium a…

Fog Nozzle Tested Fognozl Applicators, one of the several types of fog nozzles marked by the Fog Nozzle Company, Los Angeles, Cal., were given a test in the San Francisco Stadium. A sedan was doused inside and out with fifteen gallons of gasoline and set afire. The fire was extinguished in eighteen seconds with the use of a 10-foot duraluminum Fognozl Applicator, with a 1-inch Type B head. But eighteen gallons of water were used. Smoldering upholstery in the car was extinguished with a 5-gallon back pump, equipped with a 2-foot applicator

So that’s exciting. But it doesn’t seem that it lasted long. I found only one mention of it in a city directory, from 1936.